On the 18th of may, the first training seminar of the DECISIVE project was organized in Cyprus. 250 volunteers that the municipalities of Cyprus had designated, participated in the seminar and were trained in drafting proposals for funding through the “Europe for Citizens” and other European programmes. The seminar was held at the Mediterranean Beach Hotel in Limassol.

The seminar started with a general introduction to European programs and a presentation of the “Europe for Citizens” programme and the DECISIVE project.

There was also a presentation on the organization of town twinning in Flanders (Belgium), where the best practices of the City Malle (Belgium) were shown. Among others, presentations were held on: the story of the twinnings of Malle, the active involvement of volunteers through the twinning committee of Malle, and the success of the «Golden Bridge» project.

For this purpose, three trainers went from Flanders to Cyprus:
1. Anne Geens, an officer of the Vereniging van Vlaamse Steden en Gemeenten (VVSG). She explained the general framework of how municipalities in Flanders work with twinning committees and gave tips and hints as advice to Cypriot municipalities that wish to follow the same methodology.
2. Staf Verhoeven, president of the twinning committee of the municipality of Malle. As participants had the chance to see, Mr. Verhoeven is a very motivated volunteer who is running a project called “The Golden Bridge” with partner municipalities from France, Germany, Poland and the UK. As he explained, this project was also funded by the Europe for Citizens programme. Mr. Verhoeven explained how the municipality of Malle managed to establish an impressive series of activities with a high involvement of citizens.
3. Roger Rottiers, member and treasurer of the twinning committee of Malle. Mr. Rottiers is also a volunteer with a lot of experience, which he shared with the Cypriot volunteers.

The participants were trained in applying for funding through the Europe for Citizens programme, as well as completing the eForm and the budget form.

Positive impressions were aroused by the interest of the participants, as demonstrated by the number of the questions posed, which were impossible to be answered due to lack of time.

After this first training seminar, a group of 39 Cypriot volunteers / citizens and municipal personnel, will be selected and participate in a study visit to Belgium, at the end of September 2010, for a series of seminars.

On the initiative of the Union of Cyprus Municipalities, a meeting was held at its premises on May 26, gathering twinning officers from Cypriot Municipalities.

During the meeting the following issues were discussed:
• The “Europe for Citizens” programme.
• DECISIVE Project: debriefing on the first seminar and forward planning for the activities of the project.
• Information on the implementation of the SKILLS project. 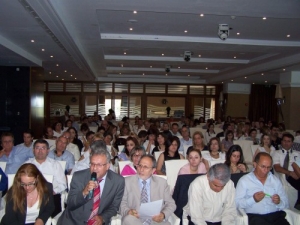