The 28th Annual General Assembly of the Union of Cyprus Municipalities was held on November 8th, in the presence of the President of the Republic of Cyprus, Mr. Demetris Christofias, the Minister of Interior, Mr. Neoklis Sylikiotis, leaders and representatives of political parties, former and current Mayors and other officials.

The first part of the General Assembly, which was held in the presence of its members, began with the speech of the President of the Union of Municipalities and Mayor of Limassol, Mr. Andreas Christou.

In view of the local elections, Mr. Christou invited everybody ”to keep on a high level and walk together, through the democratic process, to the path of progress, development and prosperity.”

The President of the Republic of Cyprus, Mr. Demetris Christofias, from the podium of the General Assembly, expressed the direct support of his Government, which aims at the substantial improvement, strengthening, reform and modernization of the local government in Cyprus and pledged that his government will remain in solidarity with the Local Authorities, despite the current difficult economic conditions, just as it did the previous three years with a series of decisions and measures that were implemented.

In his address, the Minister of Interior, Mr. Neoklis Sylikiotis, said that Local Authorities are the natural ally of the Government and the Ministry of Interior for the successful implementation of a wide range of crucial and innovative policies, which are currently under way.

The Minister described as urgent, the adoption of two acts tabled in the House of Representatives, concerning the voluntary unification of Communities and the consolidation and codification of the Laws of Municipalities and Communities. 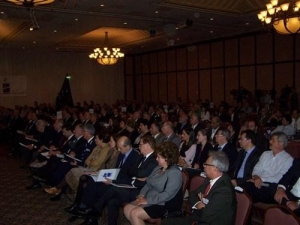 https://ucm.org.cy/wp-content/uploads/logo_EN_final-1.png 0 0 netinfo https://ucm.org.cy/wp-content/uploads/logo_EN_final-1.png netinfo2011-11-10 06:21:022018-08-22 08:13:0828th Annual General Assembly of the Union of Cyprus Municipalities – 10/11/2011
EUROPEAN PROJECT SUSTAIN: TEN DAYS VISIT OF THE EXPERT OF TEDK CHIOS IN CYPRUS...Developing the Leadership and Administrative Capacity of Cypriot Local Authorities...
Scroll to top
We use cookies on our website to give you the most relevant experience by remembering your preferences and repeat visits. By clicking “Accept All”, you consent to the use of ALL the cookies. However, you may visit "Cookie Settings" to provide a controlled consent.