The project aims to strengthen the administrative and leadership capacity of Cypriot local government, through educational programs and by providing support to executives, elected or not.

At the beginning of the conference, the Minister of Finance, Mr. Harilaos Stavrakis sent a greeting, stating the following: “The project is expected to bring multiple and significant benefits for the Local Government, but also for the citizens.

Through the Educational Program, the leaders of municipalities and communities will be provided with all necessary knowledge and skills enabling them to manage the affairs of their organizations independently and effectively.

The same officers will be able to create a new culture of lifelong learning in their organizations for continuous development and improvement. The final goal is to enable the Local Authorities to offer enlarged and quality enhanced services to the citizens”.

In his greeting, the President of the Union of Cyprus Municipalities, Mr. Andreas Christou, emphasized the importance of the project, stressing that “it is extremely important for municipalities and for communities, because by upgrading the skills of the personnel we improve the overall performance of the organizations and we improve the services offered to the Citizens”.

The project, presented to the Media by officers of CAPA, is funded by the European Social Fund and the Republic of Cyprus, as part of the activities of the National Strategic Reference Framework (NSRF) 2007-2013 of Cyprus and constitutes an intervention funded by the Operational Program “Employment, Human Capital and Social Cohesion”. 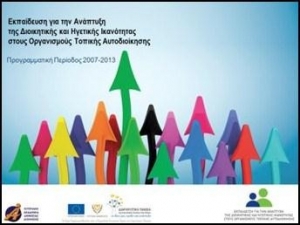 https://ucm.org.cy/wp-content/uploads/logo_EN_final-1.png 0 0 netinfo https://ucm.org.cy/wp-content/uploads/logo_EN_final-1.png netinfo2011-03-31 08:44:232018-10-04 08:46:00Developing the Leadership and Administrative Capacity of Cypriot Local Authorities – 31/03/2011
EUROPEAN PROJECT SUSTAIN: TEN DAYS VISIT OF THE EXPERT OF TEDK CHIOS IN CYPRUS...SUSTAIN: Follow-up of the DECISIVE project – 17/03/2011
Scroll to top
We use cookies on our website to give you the most relevant experience by remembering your preferences and repeat visits. By clicking “Accept All”, you consent to the use of ALL the cookies. However, you may visit "Cookie Settings" to provide a controlled consent.