In the framework of the SUSTAIN project, the expert of TEDK Chios, Mr. Vasilis Kampouras, visited Cyprus from 20 to 26 November. The visit took place following the previous visit of the expert, which was held from 9 to 19 May, when Mr. Kampouras met representatives of Cypriot Municipalities, in order for him to assess the situation in each one of them, regarding their participation in European programmes and especially, in the “Europe for Citizens” programme.

In his presentation, Mr. Kampouras, said that the Municipalities of Cyprus can be divided into three main categories depending on their characteristics in relation to the use of Town Twinning and other European Programmes:

As Mr. Kampouras said, all the Municipalities, regardless of their category, have to face -more or less- the same problems: 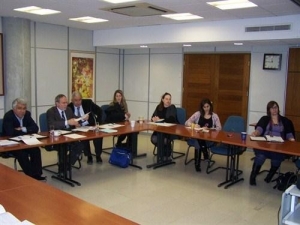 https://ucm.org.cy/wp-content/uploads/logo_EN_final-1.png 0 0 netinfo https://ucm.org.cy/wp-content/uploads/logo_EN_final-1.png netinfo2011-11-30 08:19:512018-10-04 08:23:15SUSTAIN project: second 10 days visit of the expert of TEDK Chios to Cyprus – 30/11/2011
EUROPEAN PROJECT SUSTAIN: RESULTS AND CONCLUSIONS – 30/12/2011Press meeting on the Cyprus Presidency of the EU Council – 18/11/2011
Scroll to top
We use cookies on our website to give you the most relevant experience by remembering your preferences and repeat visits. By clicking “Accept All”, you consent to the use of ALL the cookies. However, you may visit "Cookie Settings" to provide a controlled consent.