The study visit of the SUSTAIN project to Brussels took place from the 4th to the 7th of October. It involved 25 participants: 12 municipal officers from 11 Cypriot Municipalities, the Twinning officer of the Union of Cyprus Municipalities, and 12 representatives of the Local Unions of Municipalities and Communities of the Prefecture of Chios and Lesvos (citizens, academics and officials of these Unions and their member Municipalities).

The two teams arrived in Brussels from Greece and Cyprus with different flights. So apart from their joint programme, which took place on October 5 and 6, the Cypriot team was able to attend two additional events.

More specifically, the group of participants from Cyprus arrived in Brussels in the morning of October 4th and almost immediately went to the Committee of the Regions, where they attended a seminar on: “The Multi-annual Financial Framework (MFF) 2014-2020: the role of local and regional authorities in the EU budget. Towards a genuine partnership approach”. The same afternoon, the participants from Greece also arrived in Brussels. In the evening, the participants of the two groups attended together a dinner, where they met each other and the two officers of the Brussels Office of the UCM, who accompanied them throughout the study visit.

On October 5th, both groups went to the Education, Audiovisual and Culture Executive Agency of the EU, where they attended a presentation on the application process for the funding of Town Twinning projects and a discussion, during which, the participants were able to address their questions and to become better acquainted with EU officials who handle applications submitted by the Municipalities, for funding through the “Europe for Citizens” programme.

This visit was followed by a lunch and later the participants departed for the Committee of the Regions, where they attended a presentation of this European body and the 10th meeting of the “ECONOMIC AND SOCIAL POLICY” Commission of the Committee, thus getting a first taste of how the representatives of their Municipalities contribute to shaping the future EU legislation.

On October 6th, the participants visited the Brussels Office of the Union of Cyprus Municipalities, where they initially attended a presentation of the Office and of the projects SUSTAIN and Pro-I3T, which will be implemented in 2012.

The workshop has been followed by a lunch and a presentation of its conclusions. The participants then discussed on the preparation of the next event (second 10-day visit of the expert of TEDK Chios to Cyprus). Subsequently, the participants visited the Directorate General for Regional Policy, where they attended a presentation and an extensive discussion on the issue of funding through the Structural Funds, but also the financial and political crisis that Europe is currently facing. A dinner was offered to the participants in the evening.

According to the responses, the overwhelming majority of the participants were very or extremely satisfied with 8 of the 10 abovementioned criteria. Many, however, said that they had not understood the purpose of the visit before their participation (which is partly explained by the fact that many of them participated for the first time in such a visit to Brussels), and that they would prefer to have more practical and less theoretical or general presentations from the speakers. 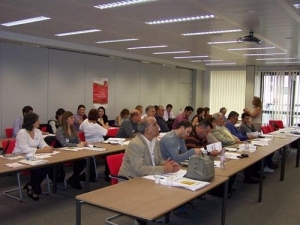 https://ucm.org.cy/wp-content/uploads/logo_EN_final-1.png 0 0 netinfo https://ucm.org.cy/wp-content/uploads/logo_EN_final-1.png netinfo2011-10-21 08:29:012018-10-04 08:30:20SUSTAIN Project: Study visit to Brussels – 21/10/2011
Six new Municipalities in Cyprus – 25/10/2011SUSTAIN project: proposals and recommendations of the expert – 30/09/...
Scroll to top
We use cookies on our website to give you the most relevant experience by remembering your preferences and repeat visits. By clicking “Accept All”, you consent to the use of ALL the cookies. However, you may visit "Cookie Settings" to provide a controlled consent.