On Tuesday, November 16th, the 27th Annual General Assembly of the Union of Cyprus Municipalities was held in Nicosia.

Mr. Andreas Christou, Mayor of Limassol and President of the Union of Cyprus Municipalities presented the activity report of the association for 2009.

According to Mr. Christou, 2009 was a year of intense activity for the Union of Cyprus Municipalities (UCM).

Among other activities, the UCM has been active in promoting cooperation and twinning activities between Cypriot and other European municipalities through the Europe for Citizens programme. The UCM also participated –in cooperation with the CEMR- in the process of drafting a strategic document for the future of the programme.

As Mr. Christou said, the UCM also applied and obtained funding for two European projects for promoting twinning in Cyprus, with a total financing of ca 100.000,00€. “The first project, titled DECISIVE, aims at training volunteers and officials of Cypriot Municipalities for the development of twinnings with other European towns. The second project, titled SKILLS, aims at developing twinnings with Italian Municipalities”, said Mr. Christou. 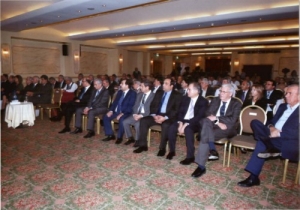