In his opening speech, Mr. Neoklis Sylikiotis, Minister of Interior of the Republic of Cyprus, underlined that the rights of European citizens will be one of the main priorities of the Cypriot Presidency in the second half of 2012. “European integration cannot succeed without active citizens, and local government must be an equal partner in the exercise of public functions”, he stated.

The next speaker, Mr. Luc Van den Brande stressed that the concept of European citizenship was evolving and was especially important in the process of founding “European municipalities”. The meaning of citizenship was no longer one-dimensional: national and European citizenship were flanked by regional, local and cultural notions of identity. Active participation in political dialogue started above all at grassroots level.

In her video message, European Commissioner Viviane Reding noted that Europe could not be built on legislation and rules alone, but relied on active citizens. She affirmed the European Commission’s commitment to close cooperation with the CoR and local and regional authorities.

In his speech at the seminar, the Secretary General of the Union of Cyprus Municipalities, Mr. Yiannis Antoniades said that “one of the objectives of the Union of Cyprus Municipalities is to bring the municipalities and the citizens of Cyprus closer to the European Union. We try to achieve this by informing our member Municipalities on the actions of the European Union, by facilitating their participation in European activities and by organizing events like this, which are addressed both to Municipalities and the citizens of Cyprus.” After a detailed presentation of the work of the Union in the field of European Citizenship (including the European projects DECISIVE, SKILLS and SUSTAIN), Mr. Antoniades said: “What I would like you to know is that for us, the effort to promote Town Twinning among the Municipalities and citizens of Cyprus does not end with the SUSTAIN project. On June 1st we submitted a proposal in cooperation with the Assembly of European Regions (AER), in the framework of the Support Measures of the “Europe for Citizens” Programme. This proposal is the logical continuation of the DECISIVE and SUSTAIN projects. As I said, DECISIVE brought volunteers-citizens closer to their Municipalities and taught them to work together to promote European Citizenship. SUSTAIN provides the tools and knowledge to exploit the relationship created through the first project. The new project, which we hope to be financed, will give the last two missing pieces to complete this effort: a) detailed information on what can be financed by the EU and how, and b) access to hundreds of potential partners through the network of the Assembly of European Regions. As you can see, for the Union of Cyprus Municipalities, the promotion of European citizenship is not just an elusive goal. For years, we have been working intensively and methodically, always in collaboration with both the European Commission and the Education, Audiovisual and Culture Executive Agency (EACEA), as well as with the strongest partners in Europe on the issue of European citizenship, such as the Council of European Municipalities and Regions (CEMR) and the Assembly of European Regions (AER)”. We would like to thank them for their help and valuable presence here.

The seminar also focused on various measures taken by official bodies and local authorities in the EU and explored practices used by local and regional authorities to bring citizens closer to the European Union. More specifically, there was a presentation of the Nicosia Master Plan by its authors, Mr. Lellos Dimitriades and Mr. Mustafa Akinci. Events also included a visit to the Famagusta Museum, in Dherynia, near the Green Line. 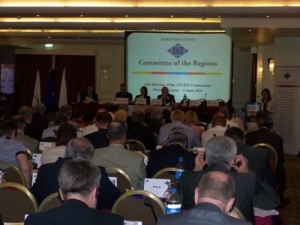