On June 7th, the Union of Cyprus Municipalities organised in the framework of the SUSTAIN project, a training session in Nicosia. The event, which has been organised in cooperation with the Local Union of Municipalities and Communities of Prefecture Chios (TEDK CHIOS), aimed to inform the Municipalities-members of the two associations, on European Programmes, and give them the opportunity to discuss eventual new processes, exchange ideas and develop their capacities in designing and managing Town-Twinning projects.

The meeting was attended by representatives of Cypriot Municipalities, as well as a team of 11 officials from the Municipality of Chios, TEDK Chios, TEDK Samos and TEDK Lesvos, who presented their experience from participating in European Programmes, and their internal processes and useful guidelines for designing new projects and submitting project proposals.

The event took place within the wider effort of the Union of Cyprus Municipalities to ensure equal and effective access of all Cypriot Municipalities to European Programmes, through which the SUSTAIN project is also co-financed. 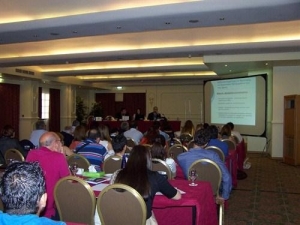 https://ucm.org.cy/wp-content/uploads/logo_EN_final-1.png 0 0 netinfo https://ucm.org.cy/wp-content/uploads/logo_EN_final-1.png netinfo2011-06-09 08:39:052018-10-04 08:40:02SUSTAIN PROJECT: First training session in Cyprus – 09/06/2011
Mr. Savvas Vergas, New Vice President of the Union of Cyprus Municipalities...Seminar: “The role of LRAs in fostering European citizenship” – 0...
Scroll to top
We use cookies on our website to give you the most relevant experience by remembering your preferences and repeat visits. By clicking “Accept All”, you consent to the use of ALL the cookies. However, you may visit "Cookie Settings" to provide a controlled consent.