The Union of Cyprus Municipalities is involved in a European project aimed at promoting Town-twinning to the municipalities of Cyprus. The project is titled SKILLS and its lead partner is the region of Lazio (Rome) through the organization ANCI Lazio.

In the framework of this project, the first meeting between Italian and Cypriot Municipalities was held on April 16th, at the offices of the Union of Cyprus Municipalities in Nicosia.

The participants at the meeting were a seven-member delegation from the region of Lazio (Rome), representatives of the Union of Municipalities and nine officers from the following Cypriot municipalities: Aglantzia, Larnaca, Nicosia, Polis Chrysochous, Engomi and Strovolos.

The meeting consisted of two parts. The first part was the kick-off meeting of the project, in which both partners planned the project and took decisions on a number of administrative issues. In the second part of the day, the municipalities of Cyprus who attended the meeting, met with their Italian partners and explored possibilities of cooperation with municipalities in the region of Lazio. A similar event will be held soon in Italy. 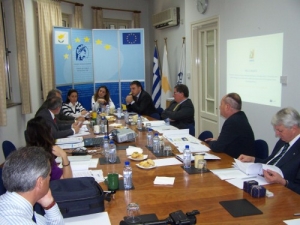 https://ucm.org.cy/wp-content/uploads/logo_EN_final-1.png 0 0 netinfo https://ucm.org.cy/wp-content/uploads/logo_EN_final-1.png netinfo2010-04-16 13:36:592018-08-09 13:56:54SKILLS Project: 1st meeting between Cypriot Municipalities and the Region of Lazio – 16/04/2010
DECISIVE Project: 9th of May Dissemination Activities – 11/05/2010Participation in the SKILLS project – 08/01/2010
Scroll to top
We use cookies on our website to give you the most relevant experience by remembering your preferences and repeat visits. By clicking “Accept All”, you consent to the use of ALL the cookies. However, you may visit "Cookie Settings" to provide a controlled consent.